Dinesh Shivnath Upadhyaya is a teacher & writer from Goregaon, Mumbai (India). He is also multiple World Records holder.
On 22nd January, 2011, He made a new world record of "Most Pencils Fit In Mouth At Once".
He used unsharped red pencils of size number 2. Brand name of pencil is "Natraj" which is the largest selling pencils in India.
In his record attempt, Dinesh S. Upadhyaya fitted total 92 pencils in his mouth without any external support at once for more than half minute.

Posted by DINESH SHIVNATH UPADHYAYA at 4:10 PM No comments:

WORLD RECORD OF MOST PENCILS IN MOUTH IN 'RECORD HOLDER REPUBLIC' 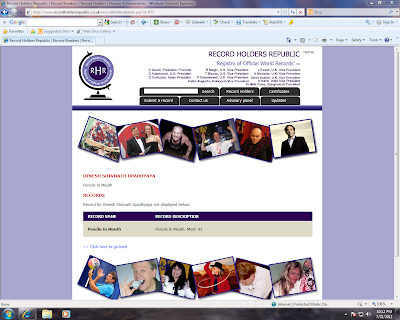 Dinesh Shivnath Upadhyaya is a teacher & writer from Goregaon, Mumbai (India). He is also multiple World Records holder.
On 22nd January, 2011, He made a new world record of "Most Pencils Fit In Mouth At Once".
He used unsharped red pencils of size number 2. Brand name of pencil is "Natraj" which is the largest selling pencils in India.
In his record attempt, Dinesh S. Upadhyaya fitted total 92 pencils in his mouth without any external support at once for more than half minute. 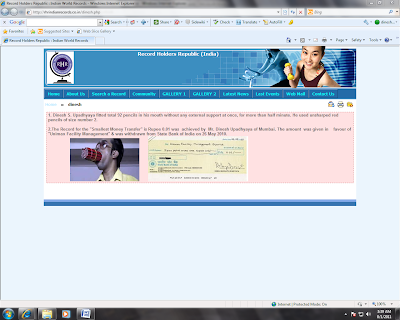 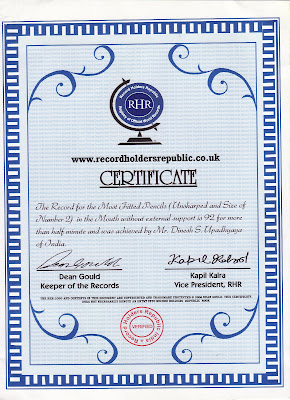 Posted by DINESH SHIVNATH UPADHYAYA at 2:55 PM No comments: 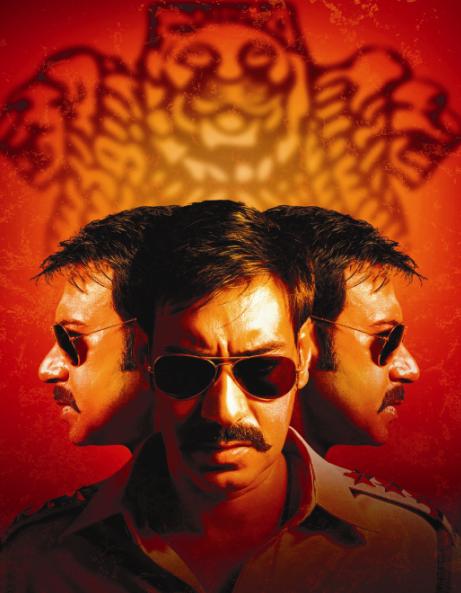 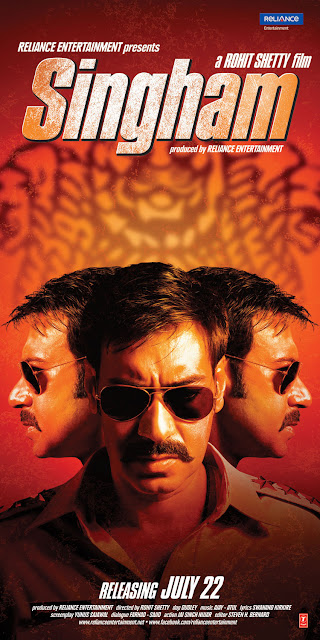 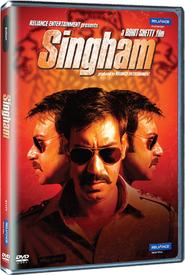 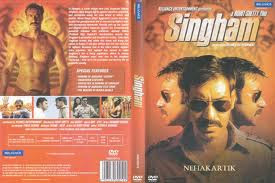 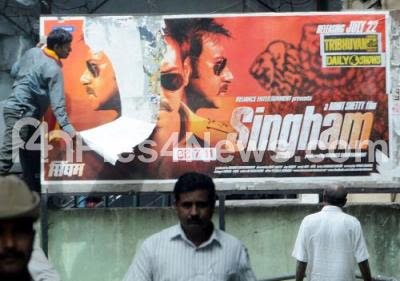 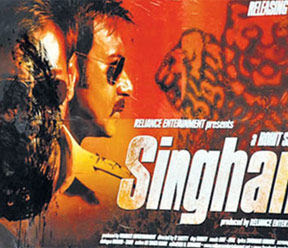 Posted by DINESH SHIVNATH UPADHYAYA at 10:59 AM No comments:

Sad news came to me that Smt. Sandhana Amte died on Saturday 9th July 2011 at Anandvan Ashram, Warora (Maharashtra) at the age of 85 following prolonged illness. She was cremated at Shradhavan located on the premises of Anandvan.
Smt. Sadhana Amte was wife of India’s as well world’s most respected freedom fighter, Gandhian, social worker & social activist Baba Amte known for his work for the rehabilitation and empowerment of poor people suffering from leprosy. http://en.wikipedia.org/wiki/Baba_Amte

Baba Amte & Sadhana Amte made a great impact on my mind & inspires me a lot from my schooldays. I start following Baba Amte after reading a chapter on him in lower class Marathi textbook. I remember, when I was in 10th standard, I successfully translated Baba Amte’s Marathi poem ‘Manush majhe naav’ in Hindi as ‘Manushya Mera Naam’.

I got a rare opportunity to communicate with both Baba & Sadhana Tai during 1992-93 Mumbai Hindu- Muslim riots.[ http://en.wikipedia.org/wiki/Bombay_Riots ].
Both were stay at Mahim, Mumbai & tried to stop violence through Gandhian way but faced many obstructions by anti social elements. At the peak of riots, I post a letter to Baba with my feelings about burning Mumbai & breaking relations. I was not expecting any reply from him. I was surprised when I got a handwritten postcard from both couple dated as 8th Feb. 1993. I was thrilled when I read this letter. Even today when I read this letter I become emotional.

Sadhana tai wrote her part in Marathi with starting in Hindi as ‘Baba likh nahi sakte’[Baba unable to write]. Other side of card Baba wrote that he is not ‘jyotishy’(astrologer) but he is predicting that one day I will definitely become a good writer. After reading these words, tears were flow from my eyes. Baba’s those words inspires me in every up down of life. From school days, I start writing short stories for children. Many of them were published in ‘Bal Bharti’ (Publication Division, I & ministry) & other magzines..Today because of Baba’s blessings in my school day time, I created a number of World records in creative writing.

Dinesh Shivnath Upadhyaya is a teacher & writer from Mumbai (India). He is a Master of Science (M.Sc.) in Physical Chemistry from Mumbai University. Science background is not a barrier in his writing passion. He believe in creative writing, so he always involve in experiments in writing. One of the fine example of his experiments in writing is an original Monologue title as ‘Hello Sister!’

Monologue, in literature and drama is an extended speech written for performance by one person. A dramatic monologue is a piece of performed writing that offers great insight into the feelings of the speaker. It will be any speech of some duration addressed by a character to a second person.
'HELLO SISTER!' autographed by Mr. Perfectionist “Aamir Khan”.
‘Hello Sister!’ is a good example of dramatic monologue which is in the form of one sided telephonic conversation. In this writing work, one sided telephonic conversation is done by Aladdin, younger brother who phone to her sister Rajnandini in one late night & remaining content is all about his emotional conversation. In his conversation, Aladdin shows different emotion of human nature. The set up of this monologue is of 1980’s, somewhere in small town of India..

One of the unique & special features of this writing work is that, Dinesh has written it with using only & only movie titles. As per his knowledge & research, this is the very first kind of work in entire writing world. Dinesh used total 621 movie titles in the formation of ‘Hello Sister!’
These 621 titles are from different Indian, Asian, European & American movies. All movie titles were verified from http://www.imdb.com/ & other renowned movie sites. He prepared an INDEX to show the details (Year, Language, Director, Producer) of each & every movie titles he used in his work.

Dinesh Upadhyaya started this work in starting month of 2009 & for this he dealt with thousands of world movies. Basically the Language of this Monologue is the mixture of Hindi & English but the titles used in it were from Arabic, Assamese, Austrian, Australian, Bengali, Cantonese, Chhatisgarhi, Croatian, Danish, Dutch, Egyptian, English, French, German, Haryanvi, Hebrew, Hindi, Hungarian, Indonesian, Irish, Italian, Japanese, Kannada, Korean, Mandarin, Malayalam, Persian, Polish, Portuguese, Romanian, Russian, Spanish, Serbian, Silent, Swedish, Taiwanese, Tamil, Telugu, Turkish, Urdu movies.
One important thing here Dinesh want to mention that, it is written with so much care that all movie titles makes sense & no one can easily point out that this work is made from only movie titles.


According to Dinesh Upadhyaya’s belief, it is world’s longest fictional writing work using only & only movie titles. It is grammatically correct & totally meaningful. 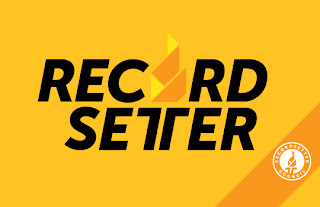 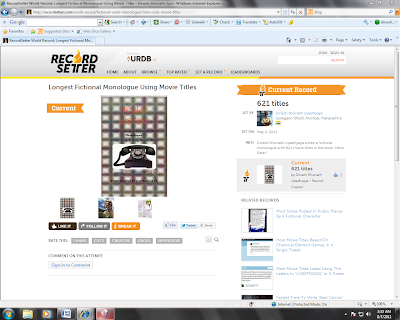 Dinesh Upadhyaya says that he has done this record to establish himself as a unique writer in entire world. He is planning to make a short movie of 8-10 minutes on it after getting reorganization from all reputed World Record Books. 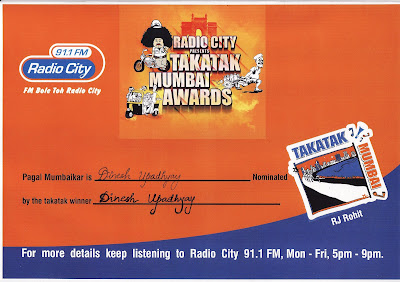 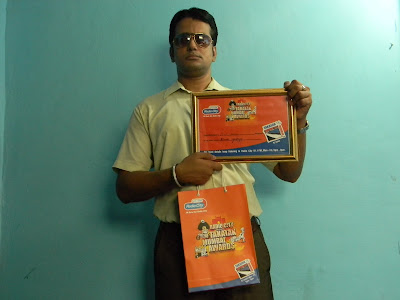 Posted by DINESH SHIVNATH UPADHYAYA at 6:14 AM No comments: