DINESH UPADHYAYA HONORED AS ‘URDB FEATURE OF THE WEEK’ ON ‘URLESQUE’ 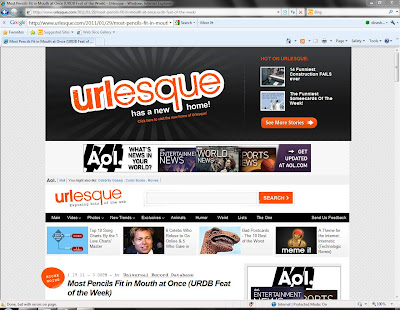 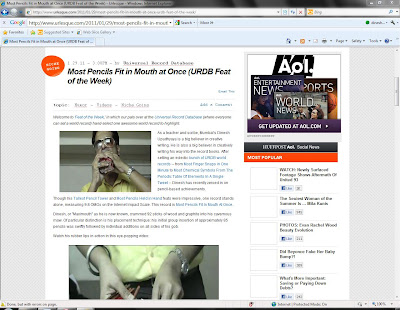 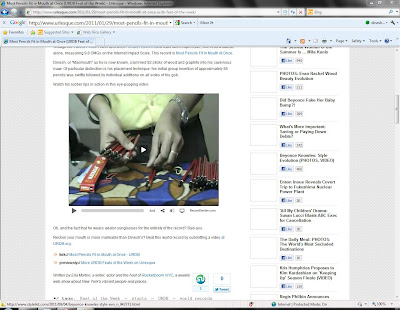 Welcome to 'Feat of the Week', in which our pals over at the Universal Record Database (where everyone can set a world record) hand-select one awesome world record to highlight.

As a teacher and scribe, Mumbai's Dinesh Upadhyaya is a big believer in creative writing. He is also a big believer in creatively writing his way into the record books. After setting an eclectic bunch of URDB world records -- from Most Finger Snaps in One Minute to Most Chemical Symbols From The Periodic Table Of Elements In A Single Tweet -- Dinesh has recently zeroed in on pencil-based achievements.


Though his Tallest Pencil Tower and Most Pencils Held in Hand feats were impressive, one record stands alone, measuring 9.8 OMGs on the Internet Impact Scale. This record is Most Pencils Fit In Mouth At Once.


Dinesh, or "Maximouth" as he is now known, crammed 92 sticks of wood and graphite into his cavernous maw. Of particular distinction is his placement technique: his initial group insertion of approximately 85 pencils was swiftly followed by individual additions on all sides of his gob.


Watch his rubber lips in action in this eye-popping video:
Oh, and the fact that he wears aviator sunglasses for the entirety of the record? Bad-ass.

Reckon your mouth is more malleable than Dinesh's? Beat this world record by submitting a video at URDB.org.

Written by Ella Morton, a writer, actor and the host of Rocketboom NYC, a weekly web show about New York's vibrant people and places.

Posted by DINESH SHIVNATH UPADHYAYA at 11:02 AM