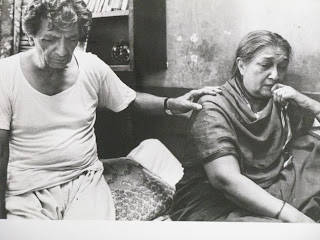 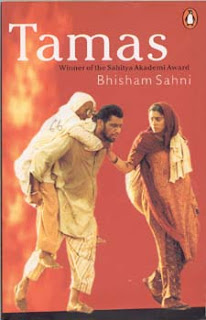 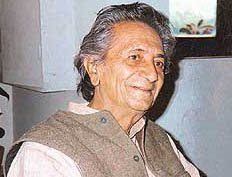 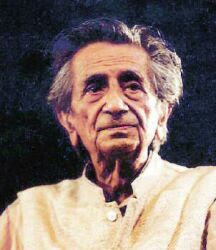 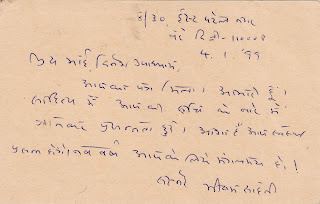 Bhisham Sahni is most famous for his epic work Tamas (Darkness, 1974) which is a novel based on the riots of the 1947-48 Partition of India which he witnessed at Rawalpindi. Tamas portrays the terror-stricken Hindu exodus from Muslim majority areas, though the overall theme remained the human-story behind the entire carnage. . He made the point that the real victims of all sectarian violence are the hapless common folk, irrespective of religious or denominational differences.  It has been translated to English, and several Indian languages including Gujarati,Malayalam, Kashmiri, and Manipuri. Tamas won the 1975 Sahitya Akademi Award for literature, and was later made into a television film in 1987 by Govind Nihalani.

Bhisham Sahni was born on 8 August 1915 in Rawalpindi. He earned a master's degree in English at Government College in Lahore, and also attended Khalsa College, Amritsar.

Bhism Sahni was a part of freedom struggle. He joined the Indian National Congress & jailed for his participation in the Quit India Movement of 1942. Upon Partition, he and his Punjabi Hindu family were forced to move to Amritsar. When communal riots broke out in Rawalpindi in March 1947, he worked with the Relief Committee.

He was the younger brother of the one of the greatest Hindi film actor, Balraj Sahni. Under the guidance of Balraj Sahni, later he joined the Indian People's Theatre Association (IPTA) in Mumbai and worked as a performing artist. He directed the famous drama Bhoot Gari adapted for the stage by Khwaja Ahmed Abbas.

In 1950, he joined Delhi College as a lecturer in English. He lived in Moscow from 1957 to 1963 and worked as a translator from Russian to Hindi with the Foreign Language Publishing House, Moscow. In addition to Hindi, Sahni is also proficient in English, Urdu, Sanskrit, Russian, and Punjabi. He has translated twenty-five books from Russian into Hindi, including Tolstoy's Resurrection.

He was general secretary of the Progressive Writers Association, and was the founder and chairman of 'SAHMAT', an organization promoting cross-cultural understanding, founded in memory of the murdered theatre artist and activist Safdar Hashmi.

He has written more than a hundred short stories, compiled in several volumes, most notably Bhagya rekha (1953), Pahla patha (1956), Bhatakti rakha (1966), and Nishachar (1983). His short stories reveal a fine sense of craft. Those considered among the masterpieces of Hindi literature include Chief ki davat and Amritsar a gaya hai. He has written stories for children that are collected in the volume Gulal ka khel. Sahni has also written three plays Hanusa (1977), Kabira khara bazar mein (1981), and Madhuri (1982).

Bhisham Sahni wrote his autobiography "Aaj ke Ateet" (Pasts of the Present), and also wrote biography of Balraj Sahni in English under the title Balraj my brother (1981).

His works reflect his unflinching commitment to India's pluralist ethos and secular foundations. . His command over local dilects and to the common languages such as urdu and punjabi has enabled him to attach his writing to the hearts and minds of common people. Most of his short stories, are the stories about the common people who are toiling under the brutal cog-wheel of the Socio-Political-Economic bitterness. A reader can feel the emotional bond with the characters of his stories, and that makes him able to caricate the bitter hardship of his time. All his works are characterized by a sense of compassion, values of universal humanism and lucid narrative

Bhisham Sahni has received a number of awards, such as the Shiromani Writers Award(1979), the Sahitya Akademi Award for Tamas (1975) and the Uttar Pradesh Government Award for Tamas (1975), Madhya Pradesh Kala Sahitya Parishad Award, for his play Hanush  (1975),the Lotus Award from the Afro-Asian Writers' Association(1981), Colour of Nation Award at International Theatre Festival,Russia for Play Madhavi by Rashi Bunny (1981), and the Soviet Land Nehru Award (1983), the Padma Bhushan for literature(1998) and India's highest literary award the Sahitya Akademi Fellowship  (2002) .

I got a rare opportunity to communicate with Bhishmji. In the first week of Jan 1999, he replied to my lengthy letter. In his handwritten postcard, he gave me blessings & also New Year greetings.

Posted by DINESH SHIVNATH UPADHYAYA at 3:44 AM