Dinesh Upadhyaya in ‘Ripley’s Believe It Or Not’ 2013 Edition


Pleased to inform you that my not one but two mouth stuffing world records ‘Most Straws (800) fit in mouth’ & ‘Most pencils (92) fit in mouth’ mainly featured in ‘Ripley’s Believe It Or Not’ 2013 annual on page no.142 whose edition recently I received.
This is one big achievement for my record setting life.

Both records videos became instant viral on internet world & viewed by more than half million on numerous news & websites & similarly both records were accepted by almost all record books.

I am hoping that my one more special record of ‘Most grapes (79) fit in mouth’ will be update in Ripley‘s next edition as I broke current Guinness world record of 57 grapes by far margin. 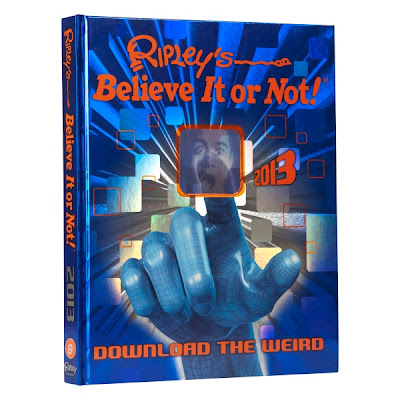 Posted by DINESH SHIVNATH UPADHYAYA at 4:40 AM

Email ThisBlogThis!Share to TwitterShare to FacebookShare to Pinterest
Labels: 92 pencils, Dinesh Shivnath Upadhyaya, most pencils in mouth, Most straws fit in mouth at once, Record Holder Republic, Ripley’s Believe It or Not, world record