ShortList is the title of a free weekly magazine published in the United Kingdom which launched on 20 September 2007. The magazine is the biggest-circulation men's lifestyle magazine in Britain with Mike Soutar, former editor-in-chief of FHM in Britain and Maxim in the U.S., as its CEO.
[ http://en.wikipedia.org/wiki/Shortlist_(magazine)]

MAN FITS 800 STRAWS INTO HIS MOUTH 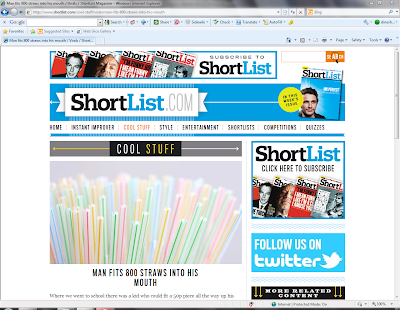 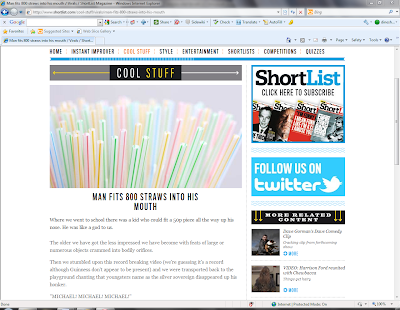 Where we went to school there was a kid who could fit a 50p piece all the way up his nose. He was like a god to us.

The older we have got the less impressed we have become with feats of large or numerous objects crammed into bodily orifices.

Then we stumbled upon this record breaking video (we're guessing it's a record although Guinness don't appear to be present) and we were transported back to the playground chanting that youngsters name as the silver sovereign disappeared up his honker.