We Should All Be So Lucky As To Find Something In This World That Makes Us Happy: Man Fits 800 Straws In His Mouth

Videogum is a daily Internet publication devoted to coverage of popular culture with a focus on movies, television, and trampoline accidents. Stereogum founder Scott Lapatine founded Videogum as a sister site to Stereogum in 2008, and enlisted editors Gabe Delahaye and Lindsay Robertson, who quickly gained a cult following for their humorous commentary on pop culture and the Internet. Videogum has spawned an online community known as the Monsters who continue to perpetuate a variety of internet memes through the site's commentary system, chat, and via Twitter. The site has subsequently garnered several nominations and accolades, including a win at the 2010 ECNY Awards for "Best Website." Videogum has received kudos from Details, New York Magazine, The New York Times, and Late Night With Jimmy Fallon for its unique take on entertainment. Videogum was named one of TIME‘s Best Blogs Of 2011.

We Should All Be So Lucky As To Find Something In This World That Makes Us Happy:
Man Fits 800 Straws In His Mouth
Posted on 2nd August, 2011 by Senior Editor: Gabe Delahaye 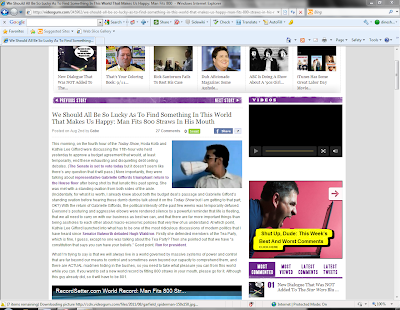 This morning, on the fourth hour of the Today Show, Hoda Kotb and Kathie Lee Gifford were discussing the 11th-hour vote held yesterday to approve a budget agreement that would, at least temporarily, end these exhausting and disquieting debt ceiling debates. (The Senate is set to vote today but it doesn’t seem like there’s any question that it will pass.) More importantly, they were talking about representative Gabrielle Giffords triumphant return to the House floor after being shot by that lunatic this past spring. She was met with a standing ovation from both sides of the aisle. (Incidentally, for what it is worth, I already knew about both the budget deal’s passage and Gabrielle Gifford’s standing ovation before hearing these dumb dumbs talk about it on the Today Show but I am getting to that part, OK?) With the return of Gabrielle Giffords, the political intensity of the past few weeks was temporarily defused. Everyone’s posturing and aggressive elbows were rendered silence by a powerful reminder that life is fleeting, that we all need to carry on with our business as best we can, and that there are far more important things than being assholes to each other about macro-economic policies that very few of us understand. At which point, Kathie Lee Gifford launched into what has to be one of the most ridiculous discussions of modern politics that I have heard since Senator Bulworth debated Hugh Waldron. Firstly she defended members of the Tea Party, which is fine, I guess, except no one was talking about the Tea Party? Then she pointed out that we have “a constitution that says you can have your beliefs.” Good point. Run for president.
What I’m trying to say is that we will always live in a world governed by massive systems of power and control that are far beyond our means to control and sometimes even beyond our capacity to comprehend them, and there are ACTUAL madmen hiding in the bushes, so you need to take what pleasure you can from this world while you can. If you want to set a new world record by fitting 800 straws in your mouth, please go for it. Although this guy already did, so it will have to be 801.
http://videogum.com/345902/we-should-all-be-so-lucky-as-to-find-something-in-this-world-that-makes-us-happy-man-fits-800-straws-in-his-mouth/webjunk/
Posted by DINESH SHIVNATH UPADHYAYA at 11:48 PM