WFGR (Classic Hits 98.7) is an American FM radio station serving Grand Rapids, Michigan. It transmits from their facility in Alpine Township on 98.7 FM. WFGR is owned by Townsquare Media. The station was known as "Oldies 98.7" and played mostly hits of the 1950s through early 1970s until June 29, 2009 when the station tweaked its format to rock-based Classic Hits and added more music from the 1970s through 1990s.
[ http://en.wikipedia.org/wiki/WFGR  ] [ http://wfgr.com/  ] 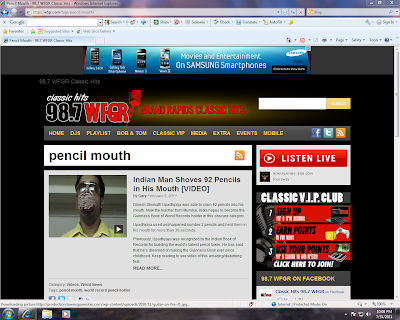 Dinesh Shivnath Upadhyaya was able to cram 92 pencils into his mouth. Now the teacher from Mumbai, India hopes to become the Guinness Book of World Records holder in this obscure category.
Upadhyaya used unsharpened number 2 pencils and held them in his mouth for more than 30 seconds.
Previously, Upadhyaya was recognized by the Indian Book of Records for building the world’s tallest pencil tower. He has said that he’s dreamed of making the Guinness Book ever since childhood. Keep reading to see video of this amazing/disturbing feat