WZPW (92.3 FM / Power 92.3) is a radio station in Central Illinois with a rhythmic contemporary music format. WZPW in Peoria, Illinois broadcasts at 92.3 MHz with an Effective radiated power (ERP) of 19,500 watts and is owned by Townsquare Media.
[ http://en.wikipedia.org/wiki/WZPW ] [ http://powerpeoria.com/ ] 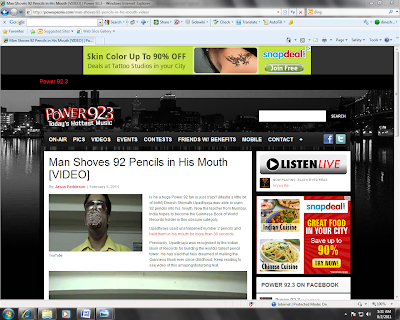 Is he a huge Power 92 fan or just crazy? (Maybe a little bit of both!) Dinesh Shivnath Upadhyaya was able to cram 92 pencils into his mouth. Now the teacher from Mumbai, India hopes to become the Guinness Book of World Records holder in this obscure category.
Upadhyaya used unsharpened number 2 pencils and held them in his mouth for more than 30 seconds.
Previously, Upadhyaya was recognized by the Indian Book of Records for building the worldís tallest pencil tower. He has said that heís dreamed of making the Guinness Book ever since childhood. Keep reading to see video of this amazing/disturbing feat.
http://powerpeoria.com/man-shoves-92-pencils-in-his-mouth-video/